A Poem About Shopping 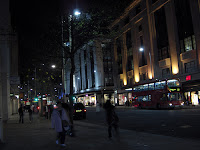 Despite being a girlie, one of lifes' best feelings for me is leaving a fashion shop having whipped through the racks (I'm pretty discerning!) and decided that actually I like what I'm wearing better than anything I've seen in the shop & mmm, the money saved! Then again clothes shops have never been good friends to me, discriminating as they do against any girl with legs longer than the regulatory 31' and slightly longer arms than usual (oddly only to be found in a Size 16 or above jacket, so jackets always drown me!). However even I couldn't fail to be impressed by the retail 'experience' that is London's Kensington High Street. Oh, and it's my only poem with a cameo appearance by Princess Diana, since the 10th anniversary of her death is almost upon us.

Photo by
Posted by The Poet Laura-eate at 5:09 pm

Ah how I wish we had a "floating-staircased nirvana" in dear old Leamo! Fabulous phrase!

I think the point is that it's got to be in Kensington High Street to be truly funky!

But Leam has a lovely throwback to the 70's department store I used to really like. Rackhams isn't it? And we have dear old Boswells in Oxford - a dying species of 19th C department store, but enjoying a renaissance I hope. Things are either incredibly expensive in there or incredibly cheap. And they evidently have some wacky buyers including a clock fetishist who keep the stock interesting!